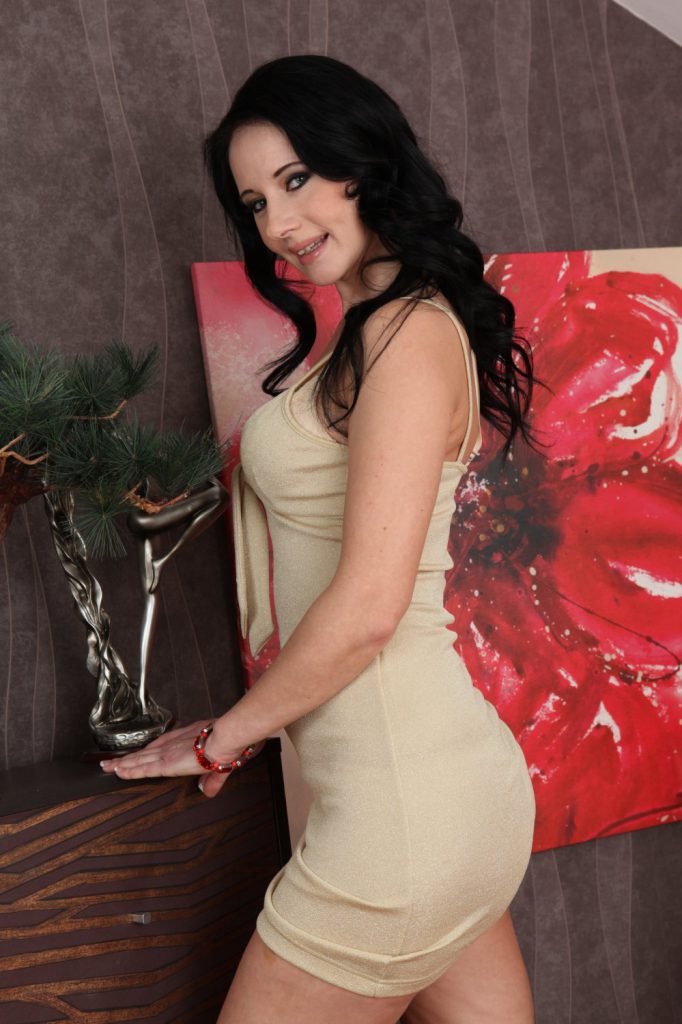 Fred knew he would impress Madeline with her favorite perfume from Paris. After seventeen years of marriage she deserved all the lavish gifts he could give her. He knew she would be a cocktease to spice things up. It had been months since they were together and he wanted tonight to be perfect.Fred presented her with the dozen red roses before they left. He wanted remind her that he still thought she was so sexy after all this time.

All eyes were on them as they made their way to a cozy booth in the restaurant.The decorations of hearts and flowers struck Madeline as being so sweet. Fred looked around and noticed other men glancing at his hot wife and felt a sense of pride.Their wives were pretty, but could never compete with Madeline’s model looks.They sipped the last of the Dom and prepared to leave.Once they were outside the restaurant they kissed passionately as a cab pulled up to the curb.

When they arrived at the house Madeline hurried in and went upstairs. Fred closed the door and threw his coat over the back of the sofa. He went upstairs to find his wife already in the bed. He undressed while she watched. As he pulled back the soft sheet, he could see Madeline’s erect nipples pressing up against the silk camisole. She pressed against him and began to rub his cock through his boxers.

Limp Dicks Get You Caged

Fred saw her expression change from passionate to pissed off! She threw back the sheet and yanked his boxers down so hard that they tore.One look at his limp penis was all it took. Madeline slapped Fred across the face so hard that his glasses flew off!He begged her to give him a minute, as he pulled nervously on his flacid member. “Fuck your minute!” she screamed angrily. She got up and stomped over to the dresser. He knew his chances were done.

Fred was humiliated and stunned as Madeline slapped his hand from his penis and put the chastity device on. He heard the lock click. She gave a sly smile when he looked up at her holding the key. She started to put on a short,red dress, black stockings and heels.”I don’t ever want to see that pathetic thing you call a dick!” Her tone was cruel and mocking. “I’m going out to get fucked by a real man. Don’t bother waiting up.” Madeline left Fred in the middle of the bed looking down at his cage.He knew he lost any control he might have had.

The RSS Feed for this site is https://cockteasebootcamp.com/rss.

We use cookies on our website to give you the most relevant experience by remembering your preferences and repeat visits. By clicking “Accept All”, you consent to the use of ALL the cookies. However, you may visit "Cookie Settings" to provide a controlled consent.
Cookie SettingsAccept All
Manage consent

This website uses cookies to improve your experience while you navigate through the website. Out of these, the cookies that are categorized as necessary are stored on your browser as they are essential for the working of basic functionalities of the website. We also use third-party cookies that help us analyze and understand how you use this website. These cookies will be stored in your browser only with your consent. You also have the option to opt-out of these cookies. But opting out of some of these cookies may affect your browsing experience.
Necessary Always Enabled
Necessary cookies are absolutely essential for the website to function properly. These cookies ensure basic functionalities and security features of the website, anonymously.
Functional
Functional cookies help to perform certain functionalities like sharing the content of the website on social media platforms, collect feedbacks, and other third-party features.
Performance
Performance cookies are used to understand and analyze the key performance indexes of the website which helps in delivering a better user experience for the visitors.
Analytics
Analytical cookies are used to understand how visitors interact with the website. These cookies help provide information on metrics the number of visitors, bounce rate, traffic source, etc.
Advertisement
Advertisement cookies are used to provide visitors with relevant ads and marketing campaigns. These cookies track visitors across websites and collect information to provide customized ads.
Others
Other uncategorized cookies are those that are being analyzed and have not been classified into a category as yet.
SAVE & ACCEPT